The platform was installed on Frigg in the summer and autumn of 1975 by Oceanic Contractors. Towed to the field on the Intermac 600 barge, the jacket was positioned on 16 July and then attached to the seabed by piles. The module support frame was lifted into place by DB 22 that October. Winter storms prevented more work on the installation until the following May. Temporary accommodation and a temporary helideck were in operation from May 1976 until March 1977. One of the permanent quarters modules was installed on the ETPM 1601 crane vessel in late October 1976. During this operation, the 90-metre bridge to TP1 was also lifted into place. The other quarters modules with the helideck were hoisted into position on 18 April 1977.

QP was due to stand entirely on the UK side, but 10 metres of one corner came to extend into the Norwegian sector. The two countries nevertheless agreed on a practical boundary in the centre of the bridge between TP1 and TCP2. A sign marked the frontier between Britain and Norway. Because of the boundary, duty-free sales were possible on QP. Taken together, TP1, TCP2 and QP comprised the central field platforms and were also known as the Frigg complex.

The quarters platform (QP) was ready for occupation in the summer of 1977. Each of the four stories above the bottom deck covered 1 000 square metres. At the topmost level was the helideck, helicopter hangar, station for helicopter fuel, offices for the pilots, and the radio shack. The latter was fitted with systems for communicating with the other platforms, Norway and Scotland. A tropospheric radio system maintained contact with the MCP-01 compressor platform and St Fergus.

The top floor incorporated offices for coordinating vessel traffic as well as a storeroom for first-aid equipment. A total of 60 two-berth cabins were provided in the quarters section, supplemented by 16 berths on the lower deck.

The central control room (CCR) was located on the upper deck. From there, the whole field – including the satellites – could be remotely operated. In emergencies, all operating functions on the drilling platforms could be shut down and monitored from QP.

Close to the control room was a rest room and offices for union officials, the field manager, the field secretary and the safety supervisor. The recreation centre was split into a section for non-smokers with a reading room and another for smokers with a bar. Next door was the cinema.

The sick bay, mess with galley, food store, laundry and cabins were placed on the middle deck. On the lower deck were a laboratory for gas analyses, gym, fire station, changing rooms and cabins. The bridge to TP1 terminated on this deck. Offices, including one for the welfare service, were found on the cellar deck, along with a machine for producing fresh water and the water storage tanks.

See technical drawings and documentation of QP in the article Technical Documentation QP. 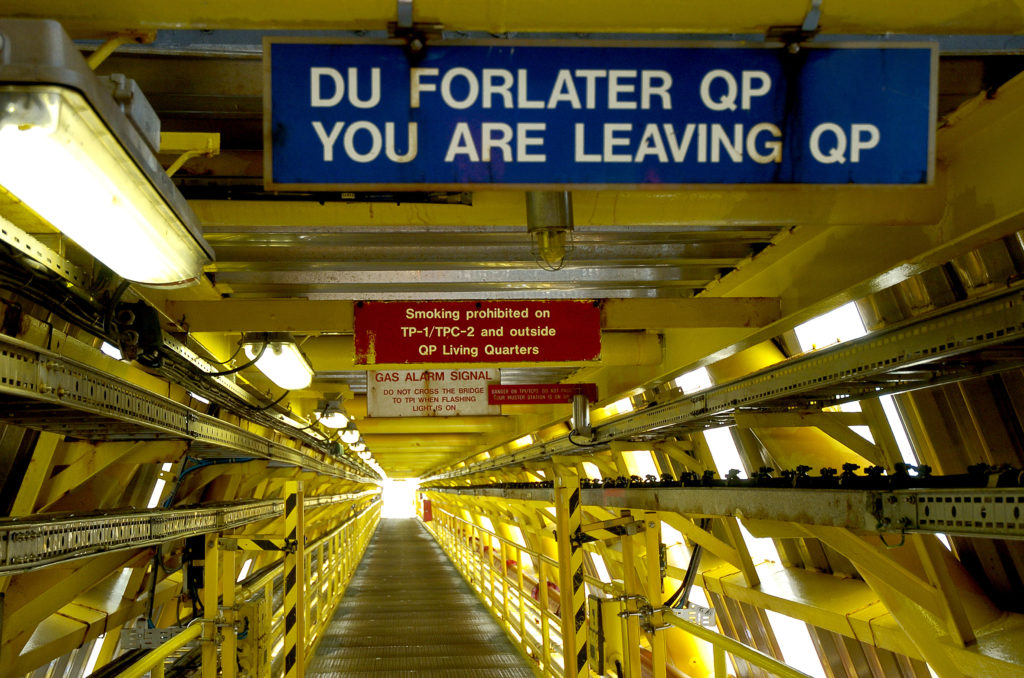